Join me at Circles of Wisdom in Andover Ma beginning Wednesday August 6th for 3 weeks of Infinite Possibilities!
Get more details and register here: http://www.circlesofwisdom.com/Infinite_Possibilities_The_Ar_P6658.cfm

Live classes at Circles of Wisdom in Andover Massachusetts.

The Why of Your Website: Featuring Website Critiques
Discover what your website needs and what visitors really think about it.
Wednesday, June 11, 6:30-9:00pm, $40
Register here: http://www.circlesofwisdom.com/Heart-Centered_Entrepreneur_Se_P6649C73.cfm 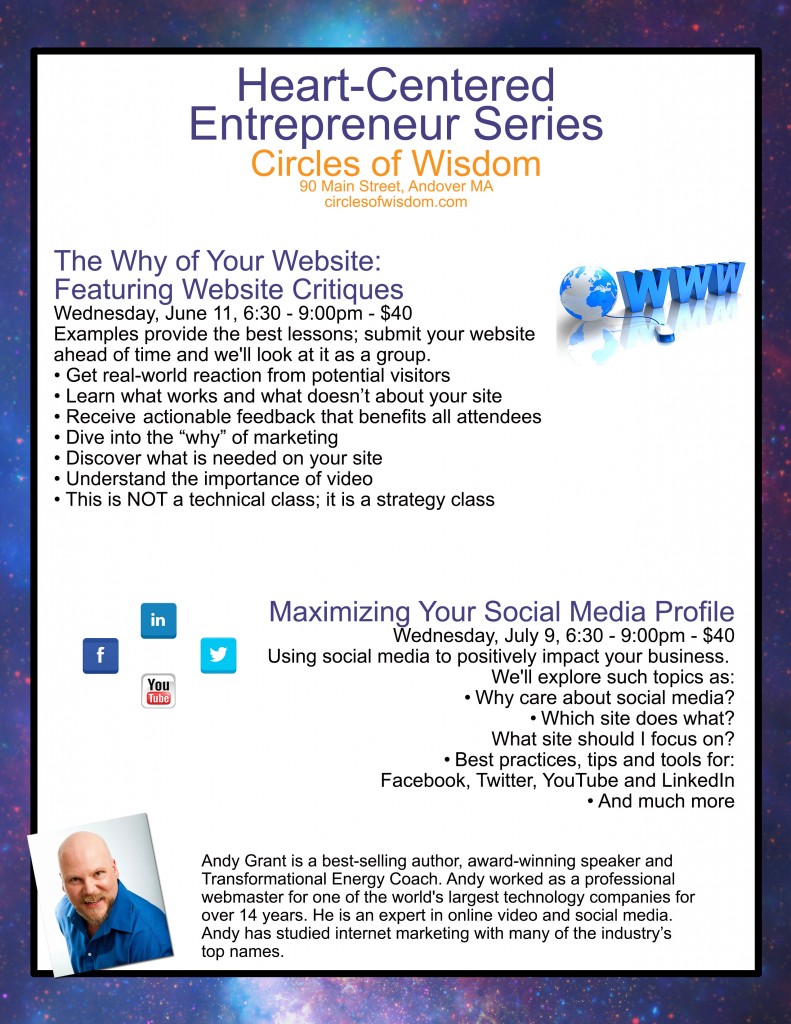 This is a spontaneous rant triggered be a video critique and resulting in one of my hidden fears coming to pass.

Today I learned that an old friend had been identified as the body found in a pond in Deerfield, Illinois yesterday. We had last talked in February. He contacted me because he was very depressed and had been experiencing suicidal thoughts. We talked for a long time. He was unemployed and about to lose his home. We talked about the reality of his situation as well as the self-defeating assumptions he was making about it.

We had met in 2001 when he became my manager at work. We quickly became friends outside of work too. He even had roles in a two short films I made. A couple of years later, he looked out for me at a time when I was extremely depressed. I was often bawling in my office cubicle. He would get me out of the office, take walks with me, make plans to get together on weekends, visit me at home… he was a great and caring friend and certainly one of the coolest bosses anyone could ever hope to have.

For anyone like me that walks a path that has them meeting depressed and suicidal people, you know you can’t “save” everyone. I knew when I decided to be open about my experiences with depression and suicide attempts that I’d meet people who would never embrace life. But I never thought it would be someone who had helped me so much when I was so low. I feel that I have failed horribly in returning that favor.

Don’t wait. Don’t delay. Don’t take ANYONE in your life for granted. When somebody crosses your mind, get in touch with them. Better to find it was nothing than to learn you ignored some silent cry for help.

This course is for anyone who has thought about writing a book. With so many people now reading from electronic devices instead of actually purchasing books the world of eBooks is exploding. In addition, publishing your own eBook is so much easier than the often long and drawn-out process of publishing a traditional book.

In this class we’ll explore:

Join me for this enlightening class as we learn more about the many advantages of eBook Publishing.

This is the first in a series of three monthly workshops specifically designed for the Entrepreneur. June will feature Websites & July will feature the use of Social Media.