Do you run your own business? Is it as successful as you desire?

If not, do you have a long list of things to blame for that?

Are you ready to take responsibility and realize that the only thing keeping you from your success is you?
I hope so. Because the best news about your business is that you are the one keeping the success you desire from you. That is great news because the only person you can really do anything about is you! 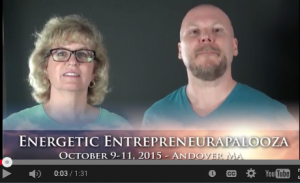 We’ve got business experts, entrepreneurs, coaches and more from all over the world coming together for an amazing three days over Columbus Day weekend in Andover Massachusetts. It all happens October 9 – 11, 2105 at the Rolling Ridge Retreat Center, and you are going to want to be there!

Fast Action special pricing available now! Payment plans for this all-inclusive event are also available but only for a few weeks. Get all the details here. 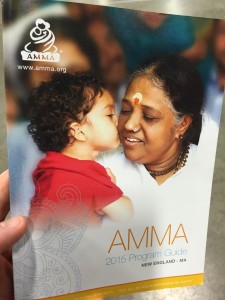 I don’t recall how many years ago I first heard of Amma, all I knew was she traveled the world hugging people. A couple of weeks ago I learned she was coming to Massachusetts, and was appearing about 20 minutes from my house. In fact she’s visited here each of the past eight years. Last Friday, July 10, was to be our first experience receiving a hug from Amma.

I’d heard there could be long lines and that Amma didn’t finish until she hugged everyone present, at this point she’s hugged over 33 million people! Lori and I got in line at 4:30pm for the program which began at 7pm with the Atma Puja, which is a ceremony for world peace followed by darshan, which is Amma’s embrace of each person. 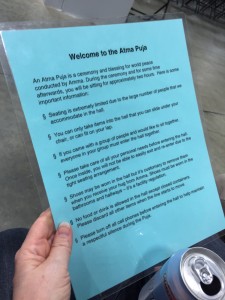 I feared we would be standing outside in the parking lot for hours, but we were quickly inside the hall with seats, food and lots of smiling people in a holding area. The energy was very uplifting and joyous. I felt sort of punch drunk and giddy just being there. We talked with the people around us, tried some great Indian food and had fun with some of the vendors. I learned that the vendors were not vendors, but volunteers from all over the country. One man pushing wraps with his homemade recipe was a software engineer from California. Around 6pm tokens were handed out and we got in line for the actual ceremony area. Each step felt like I was walking on the moon, or about to start floating away. It was really wild. A few times I was on the verge of tears, and a couple of tears of joy rolled down my check. The hours of waiting seemed to go by very quickly and it took me about 20 minutes to feel grounded and get used to the high vibration of the event.

We sat in the fifth row and saw Amma enter the building and make her way to the stage. She spoke, taught, loved and prayed and it was very powerful even though it wasn’t English. Thankfully one of her people translated as Amma spoke of gratitude, expansion, and peace. After much meditation, humor, mantras and blessings Amma took part in an elaborate costume change and began her compassionate, motherly embraces, known as darshan. 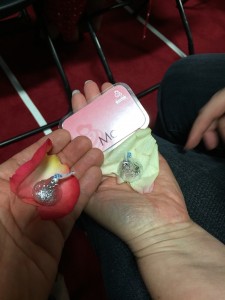 When it was our turn to get on stage it felt a bit chaotic and disorientating. Amma was sitting down and I approached on my knees. I got a very strong hug from Amma and a kiss on the head, then got another hug together with Lori. Amma is the most physically strong hugger I’ve ever come across. She also threw flower petals over us and gave us kisses of chocolate and of love. We also asked for a mantra from Amma which got us into another line and some more time sitting near her. That was my favorite part, being in her presence and watching the joy, the love, and the depth of emotion in the faces of people receiving hugs. Ages of huggees ranged from infants to a 93-year-old, and they all radiated… love and compassion. I could have stayed there witnessing all night.

To receive a mantra, Lori and I each kneeled beside Amma and got a one-armed embrace, a kiss on the head, and a personalized mantra whispered in Sanskrit. Her helpers told us to keep our mantra private and gave us instructions on how to best use the mantras. It was close to 11pm when we finally left and I will definitely see her again. I look forward to being a volunteer next year and being part of the entire event.

I was amazed at the amount of work Amma does for the world. She travels 8 months each year, and has raised and donated millions of dollars for humanitarian aid. I’ve been repeating my mantra multiple times each day for the past week and I feel blessed and supported on a level I’ve never been aware of. Amma rocks! 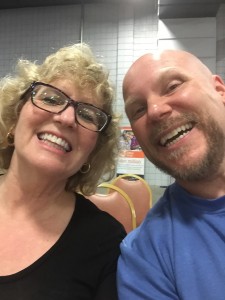 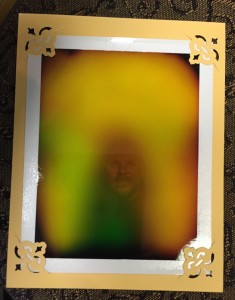 Have you ever heard of an aura? That is the subtle electromagnetic field around you.  Have you ever seen an aura? I’ve done exercises that allowed me to catch glimpses of mine in a mirror a few times, and twice I’ve spontaneously seen another person’s. Both times the auras were white. I’ve long heard of cameras that can capture an image of an aura and I even tried to get mine taken in the past, but the camera broke just before my turn. Twice!

A couple of weeks ago I had my chance again and everything worked! Many thanks to Ramona with Aura Insights Aura Photography for making this possible. I thought it was so cool how much gold is in mine as my energy work has me calling on gold the most. Click on Join My List if you want to experience what I’m referring to.

I’m sharing a few different aura photographs along with my own to share how varied they can be. Also note the breakdown of what the colors mean. 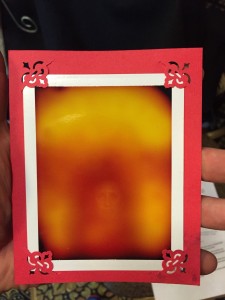 RED is the color of strong energy, fire and primal creative force. It can indicate strong passion, mind and will. It can also reflect anger, love, hate or unexpected changes. Red is a color that affects the circulatory and reproductive systems of the body, and awakening of latent abilities and talents.

ORANGE is the color of warmth, creativity and emotions. It is an indication of courage, joy, and socialness. It can reflect an opening of new awareness, or an adjustment to change.

YELLOW is the color of mental activity and can reflect new learning opportunities, lightness, wisdom and intellect. It represents the power of ideas and awakening psychic abilities. Paler yellows often reflect enthusiasm, power of ideas and spiritual development. Around the hairline, pale yellow can indicate optimism.

GREEN is the color of sensitivity and growing compassion. It reflects growth, sympathy and calm. It is a color of abundance, strength and friendliness. It can reflect that a person is reliable and open-minded. Bright bluish greens indicate healing activity. 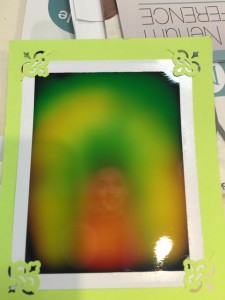 BLUE is a color of calm and quietness. It reflects devotion, truth and seriousness. It can indicate the ability for telepathy. Lighter blues reflect an active imagination and good intuition. Deeper blues indicate honesty and good judgment and can also indicate that the person has found or is about to find his or her chosen work.

PURPLE is a color of warmth and transmutation. It is a color that shows a blending of the heart and mind, the physical and spiritual. It reflects independence and intuition, as well as important dream activity and can indicate a person who is searching. It reflects an ability to be practical and worldly. The paler shades can reflect humility and spirituality. Reddish purple (magenta) indicates great passion and strength of will.

PINK is a color of compassion, love and purity, and reflects joy, comfort and a sense of companionship. It can indicate a love of beauty, tranquility, and a quiet modest personality.

GOLD reflects dynamic spiritual energy and coming into one’s own power, as well as devotion and harmony. It indicates strong enthusiasm, inspiration and a time of revitalizing and unlimited potential. It is associated with wisdom.

WHITE has all colors in it and when it is a strong shade, indicates truth and purity. It reflects that the energy of the individual is cleansing and purifying itself. It often reflects and awakening of greater creativity.

SILVER TWINKLES are a sign of great creativity, versatility and fertility being activated within the individual’s life.

The color on the LEFT SIDE is normally the vibration coming into your being. The closer it is to you, the sooner it will be felt. A few moments, hours, or as long as a few months. 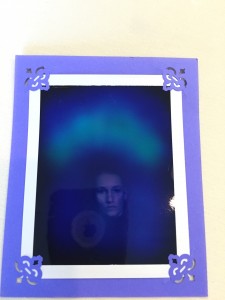 The color seen OVER YOUR HEAD is what you experience for yourself now. It is the color that would best describe you. If the color is high, it could mean aspirations, or what you wish to be.

The color on the RIGHT SIDE is traditionally the energy being expressed. The vibrational frequency most likely seen or felt by others around you. Many times, your friends will think this is the energy that you are made of. However, it is what you are putting out to the world.