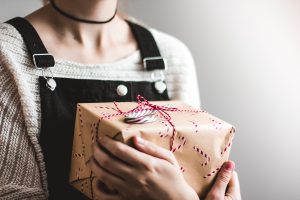 In this joyous, fun, celebratory season, have you been thinking about yourself?

Goodness, NO, that would be selfish!

Are the thoughts that you think about yourself even thoughts worth having? Are you treating yourself at least as well as you would a stranger?

The words we speak out loud and in our heads carry a lot of weight. Transforming that weight into something uplifting begins with awareness. With the latest Star Wars movie, The Last Jedi is out — and it is fantastic! Today is an excellent time to explore one of Yoda’s favorite words: Try. Yoda’s famous line is. “Do or do not. There is no try.”

He’s right. Which is why I do my best not to say I’m trying, I try, or I tried. Try is always a lie. You are either doing something or not. If you are doing it and saying that you are trying – you don’t own your actions. You are denying responsibility and playing small.

If you aren’t do anything but say you are trying, you are lying to yourself. Accept that you aren’t doing anything and decide to take action or not, but don’t keep lying about how hard you’re trying.

I’ve replaced “I’m trying” with “I’m doing the best I can.” I invite you to use that too.

Another technique to raise your awareness is to say something new in response to “Thank you.” Instead of responding with a well trained, “You’re welcome” or a grunt, why not say “My pleasure.” Such a response might be enough of a change to make both parties stop and receive the appreciation.

Our thoughts create our experiences. Everything is energy. Everything around you was first energy. It existed only in someone’s mind, but someone believed in their inspiration and took action on those thoughts.

I can be my inspiration. I can also be my judge and jury. One of those feels a LOT better than the other I assure you.

So to wrap this gift up; don’t neglect yourself this holiday season. Make sure that you are on your gift list. In addition to any tangible presents you get, give yourself the gift of increased awareness of your repetitive thoughts. Do your best with noticing how often you say you’re trying. Are you honestly taking action or not?

Put “my pleasure’ into your repertoire and begin to feel all the times you are thanked and appreciated.

Most of all, be good to yourself. 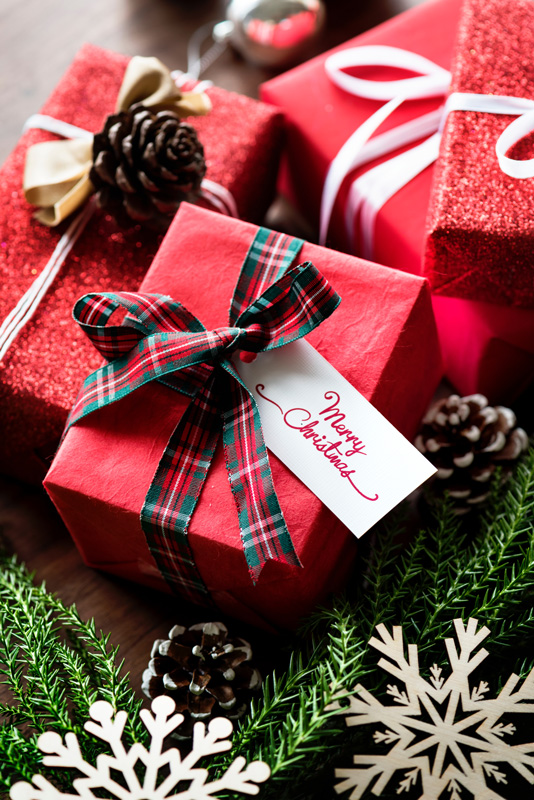 Photo by rawpixel.com on Unsplash

In January of 2013 my beloved rescue hound dog, Homer was killed by a car in front of our house. It was the first time in nine years he had left his yard which had an invisible dog fence. My wife and I were devastated. I still get choked up remembering seeing him lying still on the road and picking him up to carry him home. Homer went on to become a best-selling author and I wanted to give him the proper amount of time and mourning before getting another dog.

Sadie at 6 months old in her new home.

In June of that year, the animal shelter my wife often volunteered at (and where Homer came from) posted a video and photos of Sadie – a treeing walker coonhound/mutt missing her right rear leg. Sadie had been there a couple of weeks and nobody had taken her home. She was full of such exuberance. I don’t think she ever noticed or thought about her missing leg, which she lost at a few weeks old and then spent months in the hospital as they attempted to save it. The bills became too much for her owners in West Virginia and she ended up in an animal shelter and eventually was rescued and sent to a no-kill shelter in Massachusetts.

As soon as I saw that video on Facebook, I knew that beautiful, bounding beast of resilience was the dog for me. She was the model of perseverance I needed in my life. I called my wife to ask what thought of getting a dog with three legs. As soon as she heard the “d” of dog, she said, “yes!” She called the shelter and as a volunteer, they told her to get here today and we’ll hold her. We arrived as a family was looking at Sadie and we both said, “she’s taken!” at the same time.

Sadie has been one of the most fun-loving pets I’ve ever had. But, in June of 2017, she began having grand mal seizures, actually clusters of them. I had never heard of this in dogs, but I guess it is rather common. Despite multiple hospitalizations, vets, neurologists, chiropractic, acupuncture and more, the seizures haven’t stopped for good. 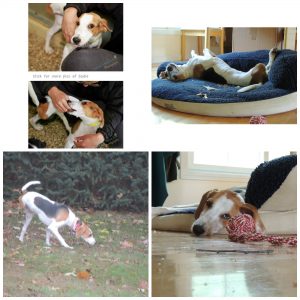 A Sadie Collage. Two in upper left was as a puppy in the shelter.

99% of the time Sadie is happy and healthy. A joy to have in my life. 1% of the time, happening on a monthly basis since June – it is terrifying, distressing, and brings feelings of helplessness and hopelessness. Feelings I’m all too familiar with. I’ve been prepared to have her put down on multiple occasions. Recently it hit me that again she is a model and reflecting what I need to see. My own periods of depression and suicidal ideation are very much like her seizures. My down times are a small percentage of my life, but when I’m in them my life feels like 100% shit show.

At times this past summer the fact that my dog was suddenly having seizures with no known cause and despite intense efforts, specialists, energy work, meds, and supplements they haven’t been cured, was just another reason to be depressed and miserable. At other times it seemed like a blessing. It was as if Sadie was helping me by making me focus on her. When she starts having a seizure, nothing I’m thinking about or feeling matters. Whatever thoughts I’d been thinking – good, bad, or indifferent – vanish in a split second as I’m desperate to help her.

I’m writing this following a long night of five seizures for Sadie and one hour of sleep for me. The first sign of trouble is that Sadie starts running around anxiously like something is wrong but she isn’t sure what. Then her mouth begins to tremor, opening and closing very fast and all her facial muscles twitch (on rare occasions it stops here).

For the grand mal’s (which all five in the last eight hours were) she falls to the ground and has full body spasms; legs racing as if chasing something in a dream, head slamming in all directions like me at a Metallica concert, she usually pees, sometimes poops, and always drools up a river of thick smelly stuff from deep within her frightened little body. These seizures usually last about a minute. If they don’t stop, she’s in danger of overheating and having permanent brain damage. While they go on, my wife and I hug Sadie, tell her she’s OK, and try to protect her head. Sometimes she slams it against walls or the floor and gets a bloody mouth. Once the physical seizure ends, she enters a state of panic and tries to get up. It is quite a battle to keep her down, but her limbs don’t cooperate and if she gets up she staggers and falls, risking more injury. When home I’m holding her down at this point with everything I’ve got. This can last 5 – 10 minutes. She seems to be blind and perhaps deaf at this stage. Roughly 10 – 15 mins after the seizure ends she suddenly recognizes us. This is my favorite thing about the whole mess. It is like she sees me for the first time. Sadie’s tail goes back and forth at a mile a minute; she wants to smell and lick my face, and I let her even when she’s covered in a wretched slime. She is still very wobbly on her feet. Sadie darts around the house like she is discovering it for the first time. It can take up to 30 minutes before she seems normal.

Usually, her seizures come in clusters. Tonight it was three separate full seizures between 1:20 and 2 am. We give her meds, hemp paste and after a 2nd seizure some Valium (rectally, so it’s a lot of fun). Tonight was the first time that I recall her having additional seizures even after having the Valium. Her final seizure of this month’s cluster (I hope) was at 10:40 am.

Fortunately, or perhaps, unfortunately, we’ve gotten rather used to this scenario. The first few times I would have sworn her seizures lasted at least five minutes and took an hour to recover from. They still are terrifying, but we just hug her, keep her as safe as we can, get peed on and hope each one is the last. Luckily each episode has ended on its own.

September was the worst – she had 10 seizures in 48 hours. One in the back seat of a car while we were racing down a highway. Not fun. We haven’t found a pattern, trigger, or cause yet. So far they happen at some point each month, anywhere from 3 – 5 weeks from the prior cluster. Her vet told us today that Sadie is officially not under control, meaning they acknowledge no treatments have worked yet.

There have been multiple times this summer I thought we were going to lose her or have to put her down. Much like I’ve often thought of having myself put down. But my three-legged sweetheart continues to teach me the fine art of resilience and to fight on. The good times are worth fighting for and vastly outnumber the moments of terror and life peeing on me.