Blog
You are here: Home / Blog / experiences / A Dog Guarantees One of the Best Days of Your Life and One of the Wors... 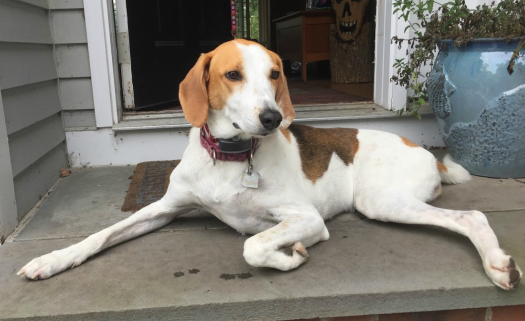 Since last June my three-legged rescue dog, Sadie, has been having cluster seizures. They are grand-mal full body seizures that last about a minute but take longer for her to recover from. At first, she is so disorientated she seems blind. She’ll try to stand up only to fall back down. She walks straight into the corner of a room and tries to keep walking. She’ll be confused and shaky for a few minutes. Over the past few months, that period of confusion has gotten longer. Lately, it might be twenty minutes or even a full day for her to seem normal after a cluster of seizures (three or more).

I previously wrote about Sadie and the amazing example of resilience she is, I’ll do my best not to repeat myself here.

The seizures can be rapid fire, as many as 4 in an hour and they can be spread out over the course of a night. This week she had 8 in 12 hours. She runs the risk of slamming her head against the floor or falling down stairs. Her jaw slams shut dozens of times in each seizure, and it is a dangerous procedure to hold her safely and not get bitten.

There has been no pattern. The seizures have shown up at some point every 3 – 6 weeks since they started. She’s been to multiple vets, neurologists, and energy workers. Sadie’s had chiropractic, acupuncture, and all sorts of healings. She’s been on numerous pharmaceuticals, Chinese herbs, and more variants of cannabis oils and pastes than Cheech and Chong could imagine. Nothing has gotten the seizures under control.

In between these horrible nights and days, she is awesome. But never knowing when the seizures will come and dealing with her heavy medication list means our life centers around her. People need to be trained to watch her even for just a few hours. Once we came home and based on the disarray in the house, we could tell she’d had a seizure. We found her cowering in the closet. We did our best to make sure that never happened again, and to the best of our knowledge, it never did.

We’ve been prepared to put her down multiple times but then she’s been fine, and we relented. But I knew if the seizures weren’t going to be controlled, we couldn’t go on this way. Being afraid to leave the house, not taking trips, needing people to say at our house even if we both went away for a day. And the toll it takes on Sadie has grown. It can now be days before she seems back to normal after a rough night of six seizures or more.

Yesterday morning, after a night of seizures, beginning at 1:30 am that continued till 2:30 pm my wife came to me sobbing. She’d hit the wall and couldn’t do this any longer. The night before as I held Sadie during three different seizures in an hour, I felt we’d done all we can do, and it was time to put her down.

So life will get a little easier and much harder at the same time. We won’t have our bounding Tigger of resilience. When I first picked Sadie up at the dog shelter, I felt that we wouldn’t have her that long. Six was the number that kept coming to me. But we’ve lost her just shy of having her for five years, and almost ten months since her unexplained seizures started, a night we thought she wasn’t going to live through. She made it through more than sixty seizures, but enough is enough.

My wife and I came to react so calmly to the seizures. I’d wrap Sadie in a waterproof blanket and hold her down while Lori ran for the acute seizure meds that were meant to stop them. The seizure was often the easy part; after one while, blinded she would fight with all her strength to get up and away, but when she did, she slammed into doors and walls. It was heartbreaking. Usually there was a period of joy when she recognized us again, often as if seeing us for the first time in weeks. But on her final day, that joyful period didn’t happen. The worse thing about it was that there was nothing we could do. We sought out and followed the advice of so many experts. Yet the seizures continued. 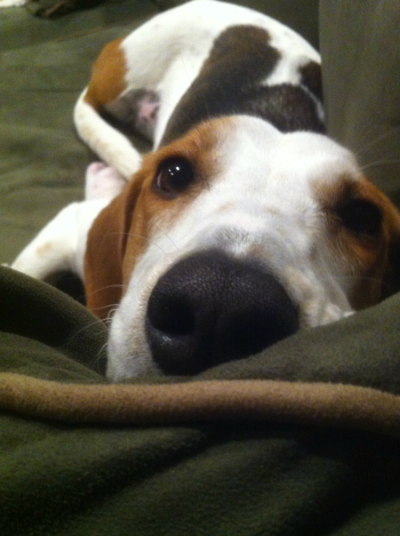 Sadie was teaching me resilience all along the way. It wasn’t only regarding her living life fearlessly with three legs instead of four. She gifted me the lesson of accepting what you don’t know and can’t control. I kept pleading and searching to know what caused this and what we could do. On her final night, in between seizures, I prayed. I asked for Sadie to be healed and for the seizures to be done for good. It wasn’t the way I desired, but they are now done for good.

I know we gave her a fantastic life while she was with us and she added such a roller coaster of emotions to our lives – far more, for good and bad, than I ever thought a dog could offer. There will be no more homemade dog food, no more mixing of medicines and supplements into her food, no more trying to find what treats she’ll take her twice daily medications with, no more pee stained rugs and furniture.

But, who will eat the tree branches that fall in the yard? Who will chase away all the wild turkeys? Who will play three-legged dog soccer with me? Who will pee and drool all over me in their seizures? Ok, I won’t miss that last one, at some point.

Now I will sob for a few hard days. I’ll wander around the house looking for her. I’ll notice the drool stains on the walls and windows from her last seizures. Eventually, I’ll realize life has gotten a little easier; all be it emptier. 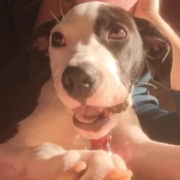 Answering a Bark in the Night 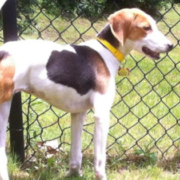 Learning From The Master: My Dog
0 replies

Astral Travel – and Away We Go! Life Activations
Scroll to top